Future Vision Home is the pilot project of Future Vision Sighted-Blind
Inc.
FUTURE VISION SIGHTED-BLIND INC is registered as a non-profit
organization which is composed of blind and visually impaired members
as well as parents/guardians.
Its purpose is to give empowerment to the blind and/vision impaired of the country so as to make them contributors and not burdens to the society.

We envision a country in which blind and visually impaired as well as sighted youth are encouraged to live a life guided by their own vision regardless of their gender, beliefs, or disabilities.

It is our mission to improve access to education by establishing a
home that allows children and youth to attend the regular schools. A
home that provides a supportive environment where blind and sighted
children live, learn, and develop independence as well as social,
communication and creative thinking skills. Obtaining these skills
will significantly impact not only their life but also the world.

In the Home, the blind and visually impaired are trained how to read and write in Braille, doing household chores, learn daily living
skills, Orientation and Mobility wherein it allows them to move around in the community independently. This is in preparation for their life in the society at large.

At present, more than fifty blind/visually impaired individuals have directly benefited. Some are now attending the Public Schools in Taguig City. One is
successful in University and another one is entering. At the Home we are not only training the vision impaired with knowledge and skills in Braille but we also provide livelihood trainings for adult vision impaired through the “Economic Empowerment Training Through Massage Training.”

Now that we are experiencing the effect of Corona Pandemic, we at the home are holding two Projects:
1. the School at the Future Vision Home project where the blind students are housed at the home and
2. The Teaching at their home project, where a teacher goes to the house of the student.
Of course we keep all Covid-19 safety regulations in place. 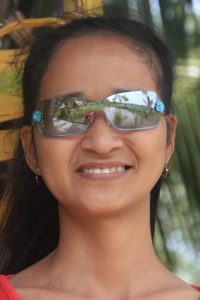 A vision from a Blind person’s perspective.

As the youngest of six siblings, and the only blind child in the family, I can say that I had all the affection I needed. I always felt loved and cared for. Due to poverty, we all had to stop studying except for my only brother. One day, an opportunity came to study free at a residential school for the poorest of the poor children in Manila. As expected, my father was against it. He was worried about me and was firm in his decision. With a strong desire to study however, I managed to convince my father.

For a person with low vision like me then, high School was difficult. I could not participate in many activities and I did not perform so well in class. Determined to learn, I used my sense of hearing to catch up. Though as if I were always hanging at the tail of a plane, I still passed my examinations. Luckily, my Principal noticed this, and I could complete High School.

After graduation, I could see very little and stayed at home. But to me the home felt like a prison cell. I never had freedom to do anything in the house. Everything was snatched from my hands, they would not let me do any chores and can you imagine, even until eighteen my sister had to bathe me. The food was always set on the table when I was left at home. One time, the food that was prepared was so dry, so I wanted to have some soup. I found instant noodles and then I heated water on the stove. Actually, it was my first time to light a stove because I was never permitted to do so. When my parents came home, they were angry at me. I did not care as I had proven that I could be independent, and I felt delighted to eat what I had cooked for the first time.
Even if I had a white cane; my parents did not like me to use it and always asked me to keep it away. I could only use it when they were not around. Every weekend, I used to go and sleep over at a dormitory in a neighboring city. There, I had the freedom to use my white cane. One time my father came to fetch me and was shocked to see me walking by myself. He could hardly believe that it was me. This however changed his perception, from then onward, he loves to see me with my cane.

After finishing my training at kanthari in Kerala, India, in January 2014 I started a pilot project called “Future Vision Home.” Through kanthari and the startup funding from Braille Without Borders as well as tireless support from family and friends, the organization is registered at the Securities and Exchange Commission (SEC) by the name “Future Vision Sighted-Blind Inc.

In 2015 the Dutch Doel voor Ogen association has helped me in the second year of operations. And in the following year till the present, I sustain the project through the salary I receive as a government Special Education Teacher as well with some contributions from the beneficiaries and sometimes from friends.